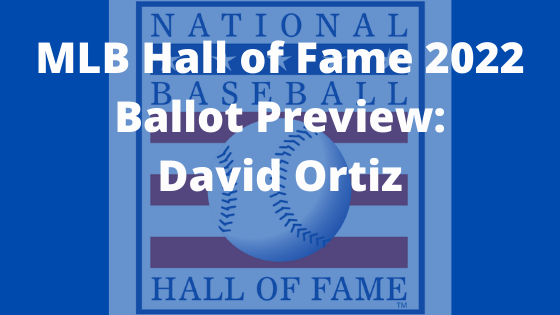 As we continue our series of Hall of Fame ballot previews as the MLB is on hiatus due to the coronavirus pandemic, today we look at the most likely inductee in the 2022 class. David Ortiz, the former DH for the Boston Red Sox, who won three World Series titles and was named MVP of the 2013 World Series.

Signed out of the Dominican Republic by the Mariners, Ortiz, then going by David Arias, spent 1994 and ’95 at rookie ball, where from year one to two his slash line went from .246/.305/.353 to .332/.403/.538. He spent all of ’96 in single-A at age 20, hitting .322/.390/.511 with 18 homers in 129 games. He was moving up slowly despite those strong batting lines because it was clear from a young age he wouldn’t be a good fielder even at first base. The Mariners had the best DH in the league at the time in Edgar Martinez and they sent Big Papi to the Twins for Dave Hollins after his minor league season was over. The Twins were more in need of a first baseman with DH clearing up soon having a 40-year-old Paul Molitor at that spot in ’97, when they pushed Ortiz up through the minor leagues, as he hit .317 with 31 home runs in 140 minor league games before playing in 15 big league games in September. He failed to earn a starting spot in ’98, and found himself back in the minors at age 23 in ’99. He once again pounded the lower-level pitching, hitting .315 with 30 homers in 130 games and finally stuck in the majors after that. 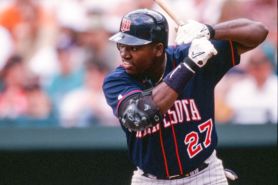 Immediately upon arriving in Boston, he was challenging Martinez for the top DH in the league. To be fair, Edgar was 40 years old that year, but he still won the Silver Slugger so it was competition for that year before Big Papi took over. From 2003-2007, he had the highest OPS+ in the AL and was behind only Barry Bonds and Albert Pujols in the MLB. Those two combined for three MVP awards in that time, while being a DH didn’t allow an easy path for Ortiz to the league’s top individual award. Big Papi still placed in the top 5 every year as he watched A-Rod snatch three MVP awards in that span.

Ortiz would get the last laugh in the playoffs, though, knocking A-Rod’s Yankees out of the 2004 ALCS and picking up MVP honors in that series by racking up 12 hits and three home runs before sweeping the Cardinals to earn Boston’s first World Series title in 86 years. He had an OPS over 1.000 in all three playoff series that year. At that time, it stood as the highest win probability added by a hitter in a single postseason at 1.9, since topped (by less than .1) by David Freese in 2011. Curt Schilling in 2001 had 2.1, the most WPA in any single postseason. Big Papi is also first among hitters and sixth among all players in career playoff WPA at 3.2. Mariano Rivera racked up 11.7 in his many trips to the playoffs with the Yankees, and he’s the only player above 5.

After three “down years” (120 OPS+) from 2008-’10, he had a resurgence for his final six seasons of his career, with a 154 OPS+ over those years after his 156 OPS+ in his first five year peak from 2003-’07. That put him fourth behind Mike Trout, Miguel Cabrera and Joey Votto in OPS+ for that six-year stretch.  That includes what could have been an amazing 2012 season when he was hitting .316 with 23 home runs, 25 doubles and 56 walks (to 49 strikeouts) in 89 games before injuring his right Achilles in the Red Sox’s July 16th game, and while it seemed like it may be minor, he didn’t return until August 24th when he played one game and was placed back on the injured list. There was speculation at the time that he may have played his final game in Boston as his contract expired and he turned 37 that offseason. 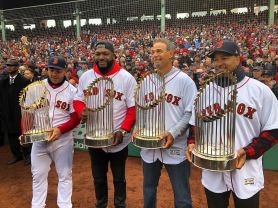 Fortunately for Big Papi and the Red Sox, they brought him back that offseason and he hit .309 with 30 home runs, 38 doubles and 76 walks in 137 games in 2013 before more big moments in the playoffs. A two-homer game in game two of the ALDS when they won the game and series over the Rays. A game-tying grand slam in the bottom of the eighth of game two of the ALCS victory over the Tigers. Home runs in games one and two of the World Series, followed by three-hit games in four and five. He was walked four times (three intentionally) in game six as the Sox won their third World Series with Ortiz on the roster and he was named series MVP posting the second-highest batting average (.688) and OBP (.760) in World Series history behind Billy Hatcher, who hit .750 (.800 OBP) in just 15 plate appearances in the 1990 World Series compared to 25 PAs for Big Papi. His 1.948 OPS ranked seventh all-time in a single World Series.

Ortiz announced 2016 would be his final season before it began, and stuck to it despite some pressure not to from how well he performed. A league-leading 48 doubles and an AL-best 127 RBI added to an incredible .315/.401/.620 slash line with his slugging and OPS figures also leading the MLB. His home runs (38) and doubles were both the most ever among players in their 40s, resulting in his league-leading 87 extra-base hits to be 25 more than any other 40-and-over player ever. His 164 OPS+ was the second-highest in a qualified season in his career (third highest if you count the 173 in 90 games in 2012) and he finished sixth in the MVP vote while making his 10th All-Star appearance and winning his seventh Silver Slugger.

So, is this guy a Hall of Famer or not?

A lot of people saw Edgar Martinez’s induction into the Hall of Fame as an opening of a door for designated hitters to get in. That makes sense even though Frank Thomas and Paul Molitor had played more DH than another position in their career. Thomas played slightly more DH than first base, while injuries forced the once-capable fielder Molitor to a DH role in his 30s. Martinez was similar to Molitor in that his move to DH was at least as much about injuries as it was defense, but Martinez played more than 65% of his career at DH while Molitor played a little under 50% there. Thomas and now Harold Baines have been inducted at over 50% DH. We’ll go ahead and only compare Big Papi to the first three and ignore Baines as there has been relative outrage about his induction.

For starters, the difference between WAR and WPA is a big help to Ortiz. WAR focuses on a total player package while WPA is much more hitting (and pitching) focused. Ortiz’s 55.3 WAR ranks just 152nd all-time among hitters, but his 50.6 WPA ranks 43rd. Despite never winning an MVP, his seven top-10 finishes left him with 2.95 career MVP shares, good for 39th all-time. He ranks 23rd in slugging, 34th in OPS, and is also in the top 50 in home runs, doubles, total bases, walks, and RBI. He ranks 8th in extra-base hits and 71st in OPS+. His offensive numbers put him solidly in Hall of Fame territory while his WAR is dragged down by having -204 runs from positional adjustment. I have no way of looking it up, but I feel comfortable saying that is the largest negative positional adjustment for WAR in MLB history.

The one other problem is Ortiz being named in the Mitchell Report for PED use. At least, according to a New York Times article in 2009 he was. That was the first public report that Ortiz had been found positive, and Ortiz’s name does not actually appear in the report, while several players were addressed by name. Ortiz consistently denied the report throughout the rest of his career. The league began enforcing random drug tests in 2004, and Ortiz never failed one. His steroid ties feel more like rumors similar to those surrounding Pudge Rodriguez who made the Hall of Fame on his first ballot in 2017.

Most likely, Big Papi’s hitting prowess and incredible postseason success will carry him to the Hall of Fame. Some voters could say no due to the DH-driven low WAR total, the rumored steroid use or find another reason to say no. He won’t be a player to watch for unanimous election as has become a ridiculous trend, but he will almost definitely make the Hall of Fame, likely on his first ballot.

Up next: Mark Teixeira.

Stats and info courtesy of Baseball-Reference and MLB.