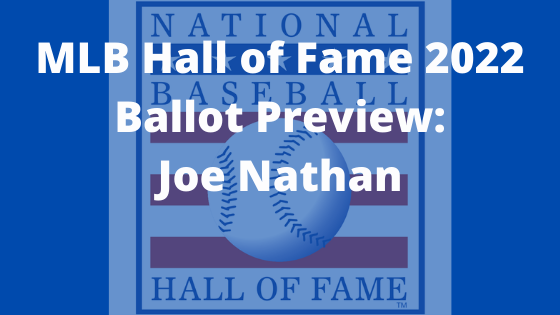 Continuing our series on Hall of Fame ballot previews as the MLB is shut down due to the coronavirus pandemic, we turn our attention to Joe Nathan. Nathan was a fantastic reliever primarily for the Twins, though he made two of his six All-Star appearances with the Rangers. 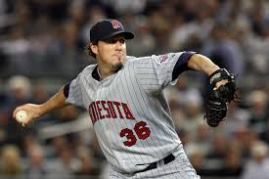 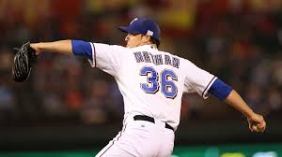 Nathan has a case for Cooperstown, but I don’t think he’s going to make it. Like many relievers, Nathan failed as a starter before switching to the bullpen. He debuted with the Giants in 1999 and made 14 starts (and five relief appearances) with a 4.18 ERA that was good for a 103 ERA+ in the high-offense era of the late-’90s. The next year, he made 15 starts (and five more relief appearances) with a 5.21 ERA that saw his ERA+ drop to 82. In the two years primarily starting combined, he allowed 109 walks to 115 strikeouts in 183 innings while also allowing 29 home runs (1.4 HR/9) and had a 1.535 WHIP. His career was on the ropes after posting a 6.32 ERA in the minors in 2001-’02 before four scoreless appearances in September out of the bullpen and a solid spring training earned him a spot in San Francisco’s bullpen for 2003, when he took off. 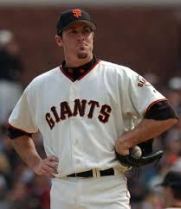 He was one of the best relievers in baseball from then through 2009, leading the majors with 246 saves from 2004-’09 before an injury in Spring Training in 2010 required Tommy John surgery. It cost him the full season and effectiveness in 2011 as well, as he had just an 84 ERA+ after never dipping below 140 since turning to the bullpen. He was back to his dominant self for two years in Texas before a dip in velocity and an increase in walks led to a poor season in Detroit in 2014. He made one appearance in 2015 and tore his UCL, requiring a second Tommy John surgery. He made 10 more scoreless outings in 2016 at age 42 with a right arm that had seen two Tommy Johns, but he was out of the league after that. From 2004-2014, he led the league with 375 saves (of 377 in his career), edging out Mariano Rivera, who had 369 from 2004-2013 when he retired. Francisco Rodriguez, Jonathan Papelbon and Francisco Cordero were also over 300 in that time.

Nathan’s Hall of Fame case is interesting in comparison to Billy Wagner, who went from 16.7% to 31.7% in 2020, his fifth year on the ballot. Wagner had 422 saves to Nathan’s 377, but younger Hall of Fame voters are more concerned about value than arbitrary stats like wins and saves. Overall, Wagner appears to have Nathan beat slightly in rate and value stats as well, but by slim margins. Wagner had a 2.31 career ERA to 2.87 for Nathan, though Wagner saw more action in the late-’90s steroid era and had a 187 ERA+ to a 151 for Nathan. Both of them have low inning totals even for a reliever for Hall of Fame standards, with Wagner having 903 as he retired “young” at 38, and Nathan had 923 as he wasn’t a regular in the league until he was 28. Compare that to Mariano Rivera, who was steady in the league from ages 26-43 and threw 1283 innings, or Trevor Hoffman, 25-42 with 1089 innings as the other two modern relievers, and Hoffman still had to wait for his third ballot to get in despite being the first player to 500 and 600 career saves.

In just his years as a reliever, Nathan had a 2.41 ERA and a 179 ERA+ mark, both much closer to Wagner than his career totals. The issue then is that lowers Nathan’s innings to 739 2/3. Bruce Sutter has the lowest inning total of any current Hall of Fame pitcher at 1042. Lowering that bar to 900 career innings seems doable. Below 750? Not so much. Going back to the full career, then, Wagner’s 27.7 WAR barely outpaces Nathan’s 26.7, and Nathan actually tops Wagner in win probability added, a much more favorable statistic for relievers, 30.6 to 29.1. Wagner and Nathan compare favorably to current Hall of Fame relievers Lee Smith, Bruce Sutter and Rollie Fingers, at least for their regular season stats.

Wagner and Nathan were both awful in the playoffs. That shouldn’t be held against them in their Hall of Fame cases, as Wagner logged jus 11 2/3 playoff innings and Nathan had just 10. Nathan gave up nine runs in those 10 innings, logging two losses and two blown saves and having -0.97 win probability added. Wagner allowed 13 runs in those 11 2/3 innings, picking up a loss, a blown save, and giving up two of five runs in the eighth and ninth innings by the Red Sox to turn a 5-2 lead into a 7-6 loss to the Angels in game three of the 2009 ALDS. Wagner was spared from having a blown save or loss in that game as Jonathan Papelbon surrendered the lead after Wagner allowed the Angels to diminish it. Smith also didn’t add any playoff value in his career, appearing in just four games and allowing five runs in 5 1/3 innings. Sutter won a World Series with the 1982 Cardinals, earning three saves and two wins in six playoff appearances, and Rollie Fingers won three World Series and a WS MVP award in 1974.

Ultimately, though, voters will likely see Nathan as a slightly worse version of Wagner, who hasn’t cracked the 50% mark on the ballot in his first five years. That makes it very unlikely for Nathan to gain enshrinement anytime soon.

Up next: Carl Crawford.

Stats and info courtesy of Baseball-Reference and Bleacher Report.